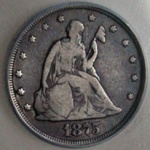 The 20 Cent Piece is a twenty cent coin made by the United States Mint beginning in 1875 and ending in 1878, one of the shortest mintages in U.S. History.

The coin was made in an effort to export more silver as other countries at the time preferred a coin that was 20/100 denomination rather than the 25/100 denomination of the United States Quarter.

Even today, a lot of countries have coins that are 20/100 denomination rather than the quarter dollars that Americans are so familiar with, including Euro coinage.

This twenty cent coin was causing a lot of confusion and was highly criticized because it was so similar to the quarter dollar also circulating at the time.

The Twenty Cent Piece and the quarter both had the Liberty Seated design on the obverse (front) of the coin and very similar eagle designs on the reverse. They also had very similar composition and size.

Citizens complained that it was necessary to read on the coin to determine whether they were holding a 20 or 25 cent coin without a side by side comparison of the two.


Most of the 10,000 20 cent pieces minted at the Carson City Mint in 1876 were melted down and never released into circulation.

It is estimated that only about 12 to 20 of them still exist.

That way you can take all of your coin books with you where ever you go.

I love my Kindle Fire

! I highly recommend them to everyone!

I know that any time I see a coin at a flea market or coin shop or anywhere else I happen to be, all I have to do is check it out in one of the many books on my Kindle Fire. That way I can refresh my memory at any time and know for certain when I am getting a good deal on any coin.


Return From 20 Cent Piece to US Coins

See Where the Mint Mark is located on US Coins

If You Can't Find What You Are Looking For....

Search This Site Or Choose a New Topic to Explore